FLINT-SEPTEMBER 6, 2017 – Inspired by Knoxville’s Kindness Rally in the face of a planned white supremacy rally there, and subsequent events in San Francisco and Berkeley, a Kindness Rally will be held in Willson Park on the campus of the University of Michigan-Flint Saturday, September 9 beginning at 2 p.m.

The rally is also in response to reports by Michigan Radio that Michigan posted the most hate crimes in the first 10 days after  presidential election and a report by the Detroit Free Press that Michigan’s alleged hate incidents experiences a “huge spike” in the weeks after the election. That story was picked up by the Independent in the U.K.

The event will open with a unity prayer and include spoken word and musical performers as well as community residents from all walks of life speaking about the power of kindness over hate. A panel discussion of religious leaders will talk about faith traditions, community action groups will be available for those who want to get involved, and NWOB will be providing hugs for unity.

The rally is a program of Neighborhoods Without Borders, which focuses on dismantling systemic and institutional racism in the Flint area. It is joined by WOW Outreach, a Flint-based organization working to reduce violence in Flint. The Community Action Network of organizations addressing inequities across Flint and Genesee County is also participating.

NWOB is a community-based group of residents who use an asset-based approach to work on critical Flint issues and their root causes. NWB’s ongoing efforts center on working to dismantle systemic and institutional racism. Follow NWOB on Facebook.

Funding to support NWOB comes from the C.S. Mott Foundation and Charlie Nelms. 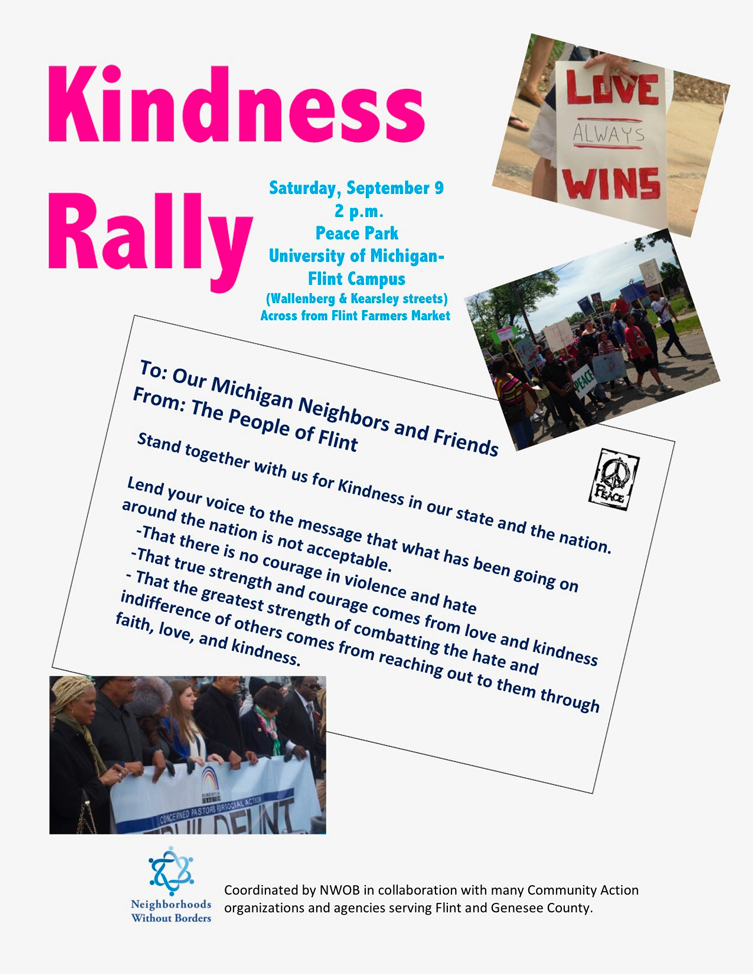